Sustainable energy is the form of energy obtained from non-exhaustible resources, such that the provision of this form of energy serves the needs of the present without compromising the ability of future generations to meet their needs.

Technologies that promote sustainable energy include renewable energy sources, such as hydroelectricity, solar energy, wind energy, wave power, geothermal energy, bioenergy, tidal power and also technologies designed to improve energy efficiency. Costs have fallen dramatically in recent years, and continue to fall. Most of these technologies are either economically competitive or close to being so. Increasingly, effective government policies support investor confidence and these markets are expanding. Considerable progress is being made in the energy transition from fossil fuels to ecologically sustainable systems, to the point where many studies support 100% renewable energy. Renewable energy is derived from natural processes. It has various forms and can be derived directly from the sun, or from heat generated deep within the earth. There are electricity and heat energy generated from the renewable energy resources.

“The shift occurred in 2013, when the world added 143 gigawatts of renewable electricity capacity, compared with 141 gigawatts in new plants that burn fossil fuels, according to an analysis presented Tuesday at the Bloomberg New Energy Finance annual summit in New York. The shift will continue to accelerate, and by 2030 more than four times as much renewable capacity will be added.

“The electricity system is shifting to clean,” Michael Liebreich, founder of BNEF, said in his keynote address. “Despite the change in oil and gas prices there is going to be a substantial buildout of renewable energy that is likely to be an order of magnitude larger than the buildout of coal and gas.”

The price of wind and solar power continues to plummet, and is now on par or cheaper than grid electricity in many areas of the world. Solar, the newest major source of energy in the mix, makes up less than 1 percent of the electricity market today but will be the world’s biggest single source by 2050, according to the International Energy Agency

“China connected 5.04 gigawatts of solar capacity to grids in the three months ended March 31, the National Energy Administration said in a statement on Monday. The Asian nation now has a total 33 gigawatts of solar-power supply.” …
“China is seeking to approve and install as much as 17.8 gigawatts of solar power this year, or nearly 2 1/2 times the capacity added by the U.S. in 2014. The push is part of the Asian nation’s plans to cap carbon emissions in the next decade and a half.” 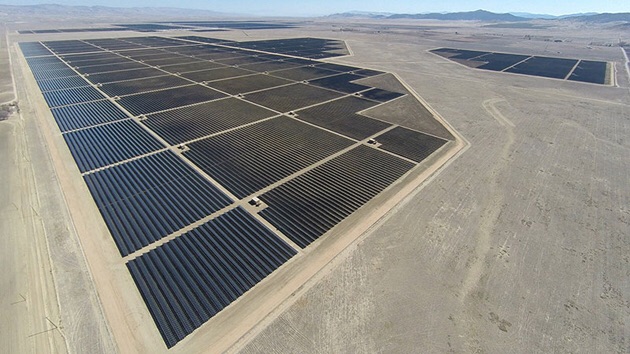 “According to a new study released by NREL, the technical potential of photovoltaics and concentrating solar power (CSP) in the U.S. amounts to just under 200,000 GW, which could generate around 399,700 TWh of energy annually.”

“The U.S.-based National Renewable Energy Laboratory (NREL) has published a new report – U.S. renewable Energy Technical Potentials: A GIS-Based Analysis – in which it says, technically, 154,864 of photovoltaics and 38,000 GW of CSP could be installed. This would mean, photovoltaics could generate around 483,600 terawatt hours (TWh) of energy annually, and CSP, 116,100. Refer to the table for a breakdown of the different solar technologies.”
“Overall, [NREL] believes rural utility-scale photovoltaics has more potential than any other renewable energy technology, due to the “relatively high power density, the absence of minimum resource threshold, and the availability of large swaths for development.” Meanwhile, Texas is said to have the ability to account for around 14 percent of this 153 GW, or 280,600 TWh annual potential.”
“Read the [NREL] report [3 yrs new] which includes a breakdown of the renewable energy technical potentials of the different states.”

Very similar to the report from France released two weeks ago.Amory Lovins and the Rocky Mountain Institute (RMI) are working with Chinese government agencies and other U.S. think tanks to produce a high-renewables energy projection for China as well. This work is expected to become part of China’s next 5-year plan. Here is an RMI press release announcing the launch in 2013 and a 2014 blog post with recent findings.

Three Energy Gamechangers for China and the World, Part 2

While China’s grid has its own unique needs and attributes, the flexibility and security of a more distributed grid and the possibility of a highly renewable future are both worth considering—especially since China is the world leader in at least six renewable technologies. Interactive two-way smart grids that can use demand-side resources to balance grid generation, such as Tianjin is currently piloting, are another important building block of China’s secure electricity future. And more distribution-level intelligence including autonomous controls can integrate microgrids and balance the complex network of loads and generators.

Achieving an 80-percent mix of renewables may be decades away, but in 2012 more added Chinese electricity came from non-hydro renewables than from all new fossil-fueled and nuclear sources combined, so the shift is gaining momentum. Indeed, in 2013, China added more photovoltaic capacity than the United States has added ever since it developed that technology 60 years ago.

“Renewable energy in Scotland from wind farms, hydro power plants and other clean technologies provided the single largest source of electricity to the country for the first time, in the first half of 2014, new industry figures will show on Thursday.

Analysis by the trade body Scottish Renewables shows that renewables produced nearly one third more power than nuclear, coal or gas in the first six months of the year, generating a record 10.4 terawatt hours (TWh) during the six-month period.” …

“Niall Stuart, chief executive of Scottish Renewables, said the record figures marked “an historic” moment for the renewable energy industry, as well as a major milestone for the Scottish government’s plans to generate 100% of its electricity from renewable sources by 2020.

“The announcement… shows the investment made in the sector is helping to deliver more power than ever before to our homes and businesses,” he said. “This important milestone is good news for anyone who cares about Scotland’s economy, our energy security and our efforts to tackle climate change.”